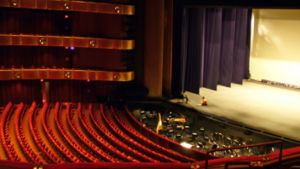 One the best places to experience Calgary live theater performances might be Theatre Calgary.  Established in 1968 as a professional company, Theatre Calgary has been around for a while and still delivers what the people want.

With live performances scheduled plus other events such as fundraiser dinners, it's worth checking out the event schedule of Theatre Calgary. Try their website at theatrecalgary.com for more information.

The type of performance art featured here is even more creative, with a touch of modern influence. Wanna see their upcoming events? Check out this website; oyr.org is where it is.

If neither of these two settings appeal to you, then you could consider watching a live performance at the Calgary Lunchbox Theater. Here, we have one of the most successful noon-time theatre companies in the world.

And so whether you're living in Calgary or just visiting, it's worth putting it on your "to see" list. The location of Calgary Lunchbox Theater on the 2nd level of Bow Valley Square in downtown Calgary is just perfect if you want to take in a performance in the middle of the work day for instance.

Here are other examples

Calgary" The golden" theater Not rated yet
Awesome! man It's one of the greatest theater in our century i haven't yet seen such a theater in my life it's huge and many actors are exhibited in the …

impressive play Not rated yet
live theatre provides surround sound and impressive play Barry's Response - Should have seen the Passion Play at Drumheller in the summer. Every …

Calgary Live Theatre artists Not rated yet
Theatre Calgary’s is a professional development of theatre artists in Southern Alberta. There are various Calgary’s FUEL program for artists with a …

the web site Not rated yet
In my view, the web site is not so impressive. The font styles and colors you adopted were not attractive. it is better to provide menu bar on top. …

Mind blowing venue Not rated yet
The best thing about Calgary is the shows that are hosted. We can experience a variety of shows which offers entertainment plus rejuvenation. The infrastructure …

If you don't have time to get to a noon performance, catch late-afternoon performances on Thursdays. This one is primarily for fans of one-act plays, and if that is your thing, visiting the Calgary Lunchbox theater could make your day.

The content of most of the theaters mentioned so far are targeted more towards adults than children. So what do you do with your kids?

Try Calgary Young People's theatre. Most youngsters would rather participate than just watch anyway, and not only do your kids get a chance to learn about the acting business, and maybe even be discovered, you can see them in action, usually, at the Vertigo Studio Theatre every month or so.

Whatever your age and your preference, there is no doubt that Calgary live theater is popular. Looking at the choice of theaters to attend and the wide range of performance acts to see, it's no wonder. Go back from Calgary Live Theater to the Calgary Downtown Map web page.