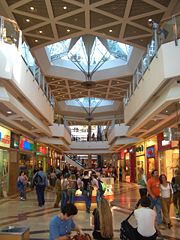 Too late to get going to any one of the old Canada HMV music store locations and see what you can find.  There was a time, though that if you needed that new music right away, this was the place to get it locally.

You would then find these music stores in Calgary were well distributed around town and most are placed near major routes and transit so getting to one should be quite easy.

So where did HMV music Canada have its Calgary stores? You might remember...

Have a look at this Calgary City map and the list of music stores that operated in Calgary below.

What do the letters HMV in "Canada HMV music store" stand for anyway? Believe it or not, it is an acronym for the title of a painting which became one of the most well-known corporate logos in the music business.

The image shows a dog, Nipper, peering into the cone-shaped loudspeaker of an ancient phonograph, the Gramophone. He looks as he is asking "How'd he get in there?". The picture is called His Master's Voice.

It has long been associated with RCA and Victor. Companies which operated in North America, before merging. HMV is British. The history of ownership here is a mess, and out of it came JVC from Japan as well, standing for Japanese Victor Company.

RCA still uses the image, even though the trademarks have expired in the 90's and it has fallen into public domain.

HMV moved into Calgary and the rest of Canada by buying a national chain called Mr. Sound in about 1987. The parent company of the Canada HMV music store chain operates in the UK as HMV Group plc. They tried a few US stores, but found competition too stiff there.  HMV was then acquired by a firm called Hilco and closed the Canadian stores in 2011.  Hilco folded in 2017.

It was a good thing when we had these Calgary HMV stores. Go back from Canada HMV Music Store to the Internet Site Map web page, or visit the Calgary City Maps homepage.