What happened to make 1980s rock music what it was? Here are a few random examples, and you might want to find great cover bands playing this kind of stuff around Calgary.  Check out our entertainment maps.

Led Zeppelin - a 70's band that helped start it all.

Some experts point to the debut of Van Halen in 1978 as the beginning of the big wave of fun metal. Hair metal as this kind of music is often called.

Bands such as Motley Crue and Poison took over the hit metal positions originally expected to go to New Wave of Britsh Metal type groups including Def Leppard and Judas Priest. The Focus turned to endless partying, in Calgary and elsewhere.

Guns'n Roses was the leader of this batch. Check out Stryper for their unique angle.

Meanwhile, metal took on a more sombre turn in the background. Serious, dark metal fans previously devoted to Black Sabbath and the like turned to Iron Maiden, and then the ultimate leader of 'em all, Metallica.

These bands, from thrash to prog-metal, became a favourite amongst 1980s music rock fans. Rush is the only Canadian example worth mentioning here.

Another form of 1980s rock music which started in the 70s. I might say Bruce Springsteen's 1973 debut, but Bob Seger was a big contributor as well. This style may appeal more to 80s music trivia buffs. The sounds are a bit more traditional, but they're good and wear well.

Both of these artists had considerable success in the 80 music rock scene, along with later guys such as John Mellencamp and Tom Petty. A great Canadian contribution to this genre is the Tragically Hip, who hit their stride in the early 90s and brought a little metallic edge in at times. 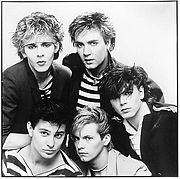 Duran Duran in their early years

Let's see, what's coming in from Europe. Lots. We could start with Kraftwerk, a quirky 70s electronica outfit from Germany who left quite an impression on the scene.

The major focus of this genre was dance music. We saw omniscient American music stars of the decade such as Michael Jackson, Madonna and Prince borrowing heavily from here as well as other styles to dominate much of the decade on the pop charts and dance bars around Calgary.

And you can't forget the products of the Stock/Aitken/Waterman team who brought us Dead or Alive and Bananarama. Sorry, no Canadian winners here. Luba came close, though.

Punk rears its ugly head once more. And we loved it. It was great. According to author Seb Hunter, Kurt Cobain killed metal. Not too far off the mark.

Once Nirvana fast-tracked us into the 90s, everything old was old. They got together in the 80s and received some help from other groups such as Soundgarden.

Who came before these guys? The Replacements, Romeo Void, the Violent Femmes. Iggy Pop. U2.

The Revolution was not televised. It came through your low-power university FM station. If you want Canadian, give the Matthew Good Band a listen.

What other kinds of music

Country remained popular throughout the decade.  And it became even more in the early 90's with Alan Jackson, Garth Brooks and line dancing.

Of course we had a resurgence of blues and roots rock as well.  And the onset of rap.  It was a decade of variety for sure.