What can you say about a Caribbean-style steel drums band playing in Calgary, Alberta? Is this for real? Seriously, how could it have been authentic? 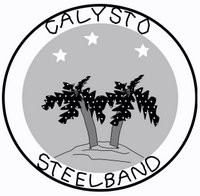 Let the truth be known, the musical director of this outfit, Ann Jamieson, has spent many years living in Barbados, West Indies. While there, she acquired intimate knowledge of many of the nuances of the island's culture.

No not the Barbados vacations tourist culture. Instead, the way of living of the locals who are there NOT for an escape but because they often know of nothing else.

Ann is "Heavenly blessed and worldly wise" as the old song goes, having lived in both the Canadian Maritimes and the harsh prairies of Canada for very significant portions of her life as well. She is a woman of science, working mostly for engineering and consulting companies as well as energy producers.

Ann has been playing steel drum in various outfits since she was a child. She has instructed many children in their first drums lesson, music fundamentals as well as steel pan technique over the decades. Some of these people are still in this cultural performing act.

What made this band so unique? Firstly its domain. Calgary. Secondly its size, as many Caribbean steel pan performing units consist of three or four players. By comparison, Calysto Steelband had as many as 24 players and is presently around 17.

This gave the organization the unofficial title of a "Steel Orchestra", as our hosts in Barbados have dubbed us while playing there.


You can also view a map of the song list on the song lyric finder page.

See where the band is playing, so that you may experience this musical outing for yourself.

Rather a 5-man rock band?

Have a look at my band Back in the Day for 1960's, 70's 80's and 90's rock. Here is a description. Go back from Steel Drums Band to the Steel Drum Pans web page or visit the Calgary City Maps homepage.