The Calgary Sun Newspaper. For what really matters.

Great - the Calgary Sun Newspaper sports coverage.  There's something about the city of Calgary...and it ain't just this.  Cowtown is a great city. It's expanding quickly and the economy is still rising.

Real estate has stabilized in value over the last few years. It looks like these Calgary trends will continue for years to come.

Tourism plays a key role in our fair city's economy, as we have lots of fun and entertainment to explore for residents and tourists alike.

The Sun covers Calgary Flame hockey, the Canadian Football League in summer and fall, as well as Calgary basketball and Northern League baseball, to begin with. You can also catch up on golf and lacrosse if that's your thing.

About The Calgary Sun Newspaper

This daily paper has been published in Calgary since before 1980, as a division of the Sun Media. It began as a broadsheet newspaper called The Albertan, and then evolved into a daily tabloid, eventually becoming The Calgary Sun.

Nowadays you can catch them online at canoe.com

The sports section also features a young amateur model often dressed in a bikini. We look forward to seeing our Calgary Sunshine Girl, and a different girl adorns that renowned page each day.

There used to be a Sunshine Boy featured as well, but that was cancelled due to a lack of interest.

Guess which hockey team always gets the nod from The Sun. The Calgary Flames. 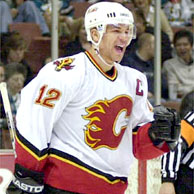 This professional hockey team plays out of the Pengrowth Saddledome in Calgary. The Calgary Flames fit into the Northwest Division of the Western Conference of the National Hockey League, our beloved NHL.

The Flames started playing in Atlanta, Georgia for the first eight seasons of their careers. Then the Atlanta Flames packed up and moved to Calgary in 1980. The only NHL team to move from the United States to Canada.

Then they first spent three years playing their game in the Stampede Corral, until the giant new Olympic Saddledome became ready for the Flames in 1983.

Who are the Flames' main rival? The Edmonton Oilers of course. When they play together they bring the fans screaming to their feet in the stands, and the games can be quite memorable. Throw in a few goals, a coupla beers and you're in for a good time.

What did you love growing up? Good chance it had something to do with sports. Hockey. Baseball. Swimming.

Maybe your greatest sports memory was last season at that Flames game. Maybe not. Anyway, if was great, it's worth telling about. Now's your chance.

Great memories from others

cricket Not rated yet
while i am playing cricket its very interesting game to play i loved it very much. when i play it for the first time i fell down and my face was damaged …

newspapers Not rated yet
Newspapers aree meant to be read carefully as they give us important information about the city in which we live. Therfore newspapers are used carefully. …

best player Not rated yet
What if you have won the best player of the match ? yes i have won it 3 times in my life and it is the best experience a plyaer can have in his sporting …

World Cup 2011 Not rated yet
I am really very proud of my Cricket teams ( Indian Team) won the world cup 2011 after a long time back. We are very proud of as Indian. Barry's Response …

Manchester United winning UCL 2008 Not rated yet
On the great night of May 21st 2008 the course of sports was changed by the Red devils as there fans calls them. It was no regular night as one of the …

Memory about swimming Not rated yet
From my childhood my father has encouraged me in swimming,and later on i love to swim. when i was 3 years old i started swimming; as i grew up i became …

The Sun will be there to document those great times.

Go back from The Calgary Sun Newspaper to the Calgary Downtown Map webpage.